Sarah Farley was a charismatic leader of the homesteader community organization L.A.N.D. ((Local Action for Neighborhood Development) of the Lower East Side and an old friend of Billie Holliday. She was running a thrift shop with the help of Melody D'Arnell on the ground floor of a burned building, at , between Avenue A and B, in the . 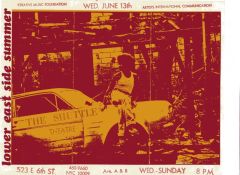 Mrs. Farley allowed to Sandro Dernini to move in the building and to live on the third floor, with no glasses in the windows and only a portion of the floor and of the ceiling. There was no water and no electricity. It was very cold and very hard for him to live there, but he had no other chances. Giuseppe Sacchi, a journalist friend helped him to survive and then together they decided to make in the ruined basement of the building, totally full of garbage, a new community multi forms art space: The Shuttle Theatre.

In the Lower East Side in that time there was a a really incredible gathering of artists from all over,  together  with a strong local community which was not present in the past Sandro’s Chelsea experience with Plexus performance space.

In the Lower East Side Sandro discovered what meant to be in the community of the .  He was  lucky to have, as a big mama, Ms. Sarah Farley. She was a real community leader of the homesteaders in the where there was a large quantity land with burned buildings that the community people, for their survival, was trying to recover, always in big fights with the Mayor Koch.  She always stated that land was belonging to the people, “People have the right to live”, she usually used to say. Through her, Sandro discovered the cultural identity of the  Lower East Side Community and he became deeply connected with it culturally, understanding at the same time his Sardinian roots and what meant to defend own traditions.  was not just a place for old or new immigrants.  It was a very rich, may be the richest, place culturally in . Many community artists came and played in the basement of the Shuttle Theatre.